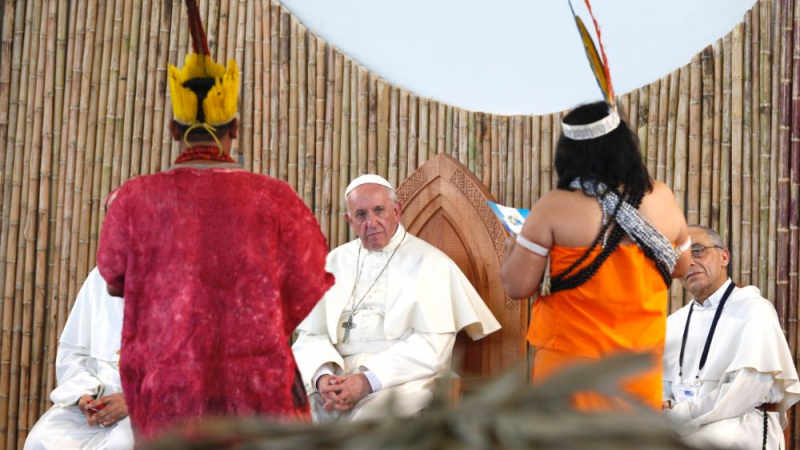 A light on a very dark night

The thicker the darkness grows in the Church, the more the wisdom of Archbishop Lefebvre shines, and the more we must be thankful for all he did.

As I write, the Synod for the Amazon is about to start which will deepen the crisis at a yet unprecedented level. Let us mention only two items on the agenda of the Synod: Revelation and the priesthood.

Saint Pius X, in his encyclical Pascendi, wrote that for a modernist, Revelation is the same as conscience, “they make conscience and revelation synonymous”, which is in fact the same as a simple natural religious feeling. So, religious feeling becomes God’s word, and must be respected.  Our superior general gave recently a concrete example. According to the Instrumentum laboris of the Synod, the Church must be able to assume to itself elements such as local traditions on spirit-worship and Amazonian traditional medicines, which resemble so-called “exorcisms.” As these indigenous traditions are rooted in a soil that has a history, it follows that this “territory is a theological place, it is a particular source of God's revelation.” This is why we must recognize the richness of these indigenous cultures.

Evangelisation no longer means to teach the gospel, it now means to learn from the people we meet, to see God in their way of living, in their local traditions, no matter how pagan they may be. We may be shocked to hear this about the upcoming Synod, but in reality it is not a new issue! This was already taught by the Bishops of Brazil in … 1975 and 1976!  “The Indians already live the Beatitudes… The Indian communities are a prophecy of this new way of living where the most important is man.” “Native communities must be received as evangelizers, so that they will become the model of our society that has much to learn from them.” “The Indian has a mission to accomplish: to make sure that the civilized people rediscover civilization” (1998 Si Si No No Congress, Courrier de Rome, p.457).

The Synod is also challenging priestly celibacy. Here again, there is nothing new under the sun.  It recommends the ordination of married men in areas where there is a great shortage of priests. The Amazon is not the only area short of priest, China, Africa, and even Canada are also. Some priests have 40, 50 parishes to minister to!

Bishops do need assistants; souls need the sacraments. Some may object, therefore, that in the absence of worthy candidates, it would seem that unworthy ones could and even should be ordained. St Thomas is his well-known wisdom answers that frequent objection:

“God never so abandons His Church that apt ministers are not to be found sufficient for the needs of the people, if the worthy be promoted and the unworthy set aside. And though it were impossible to find as many ministers as there are now, it were better to have few good ministers than many bad ones, as the blessed Clement declares in his second epistle to James the brother of the Lord.” (Suppl. q.36, a.4)

In all the history of the missions –– that includes our own here in Canada, starting with the early Jesuits, then with the Oblates of Mary Immaculate in the West and the Great North –– celibacy has always impressed the natives.  “Why do you not have a wife like the Protestant minister?” they often asked the Catholic missionaries.

There is the story of an African boy who was converted by spying on a priest to see if he was truly living the celibacy he was preaching. Not only the boy was converted to the true religion but he himself became a priest, and later a bishop, believing that only the true God could give that gift to men.

There is also the story of the hidden Christians of Nagasaki. One of the three questions that had been handed down generation after generation for over 220 years that would identify a real Catholic priest was: “Are you married?” Celibacy with the submission to Rome and the devotion to the Blessed Virgin Mary were –– and still are –– the marks of a true priest.

These renewed attacks on priestly virtue, as a battle-ram, shake the very foundation of the Church. which is the mystical body of Our Lord Jesus-Christ, the High Priest, the Son of the Virgin, will deepen the darkness covering the Church as it did at Calvary on Good Friday: “there was darkness over the whole earth” (Mt 27:45). Nevertheless, “the light shineth in darkness” (Jo 1:5), and one who did give testimony to this priestly light is none other than Archbishop Lefebvre. He understood, back in the 1960s, that by touching the priesthood and the Holy Mass, as was done at the Council and after it, and as Luther himself had done, the very survival of the Church was at stake. Thus, the need to provide for a structure for the formation of good priests and for their life in the apostolate afterwards.  There you have the essence of the Society of St Pius X.

The archbishop wrote in our Statutes: “A great love of God, of the Holy Trinity, will kindle the hearts of the members of the Society. This charity must be such that it naturally engenders virginity and poverty, that it constantly arouses the gift of self through faith and prompt, generous and loving obedience.”  A crisis of chastity is then the sign of a weak charity.

This is an echo of St Pius X’s exhortation to the clergy: “May chastity, the choicest ornament of our priesthood, flourish undimmed amongst you; through the splendor of this virtue, by which the priest is made like the angels, the priest wins greater veneration among the Christian flock, and his ministry yields an even greater harvest of holiness.”

Let us continue to pray for priests, all priests! And let us do penance for the unfortunate Synod.

May Our Lady of the Holy Rosary, who has crushed all heresies in the whole world in the history, pray for us during this month dedicated to her.

In one year, the Society of St Pius X will gather in Lourdes at the sacred Grotto, to thank the Immaculate Conception for her powerful protection since the birth of our institute, which will then celebrate its golden jubilee.  Many pilgrimages are preparing to bring as many faithful as possible to this event which will take place the weekend of Christ the King, October 25-27. There will certainly be a few groups flying from Canada.  Stay tuned for details, write to the district’s secretary ([email protected])  if you are interested to join us.