On October 13, 1969, the great adventure of Écône began in Fribourg, Switzerland. At the St. John Bosco school on Marly Road, nine seminarians who entered put themselves under the direction of Archbishop Lefebvre to prepare for the priesthood.

It was to the commemoration of this historic event in the Church, on October 5, 2019, that the seminary was invited.

The starting point of this pilgrimage was the Notre-Dame de Bourguillon, Guardian of the Faith, to which sanctuary the Archbishop and his followers often came to pray. Some even received holy orders there.

To everyone’s great joy, a pioneer of the fight, Bishop Tissier de Mallerais was present. 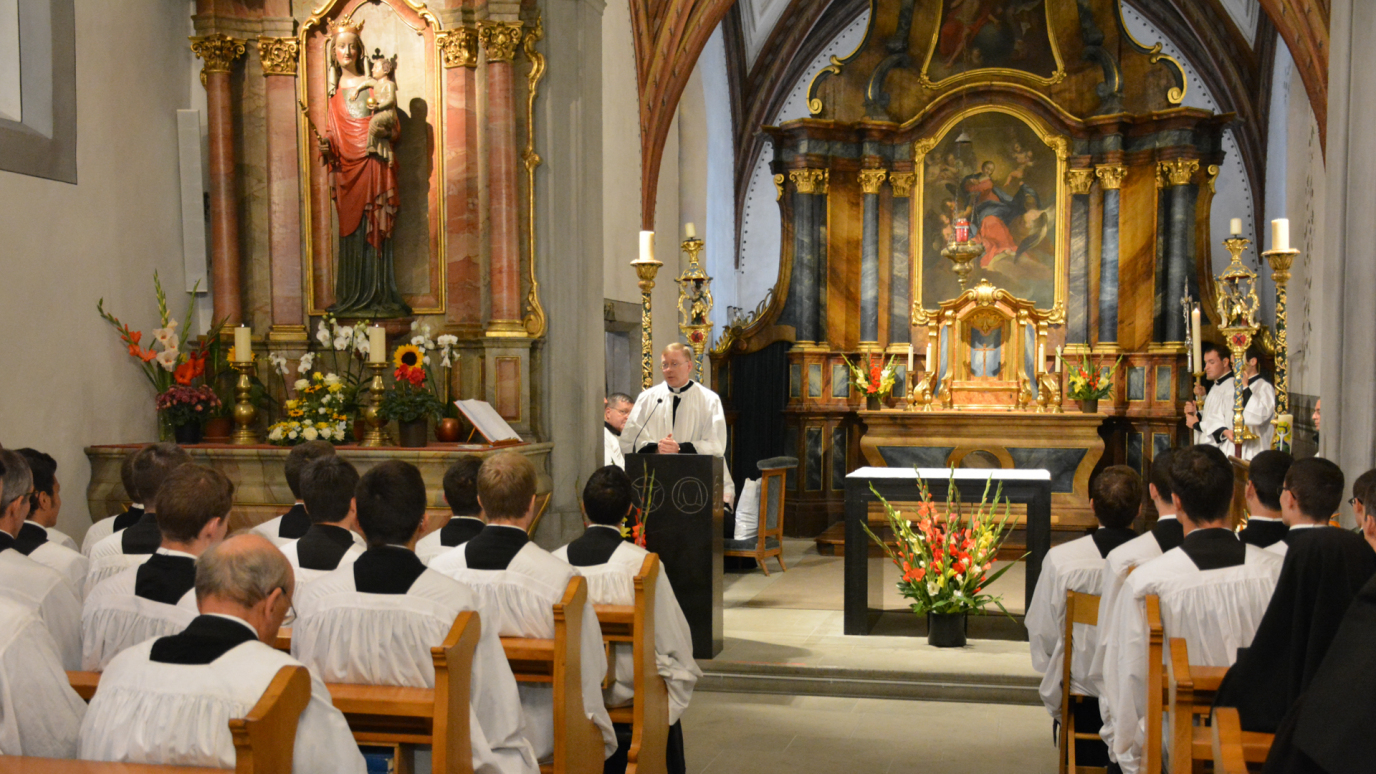 After the renewal of the consecration of the Fraternity to the Immaculate and Sorrowful Heart of Mary, the procession moved and descended the steep path that leads to the Lower Town. 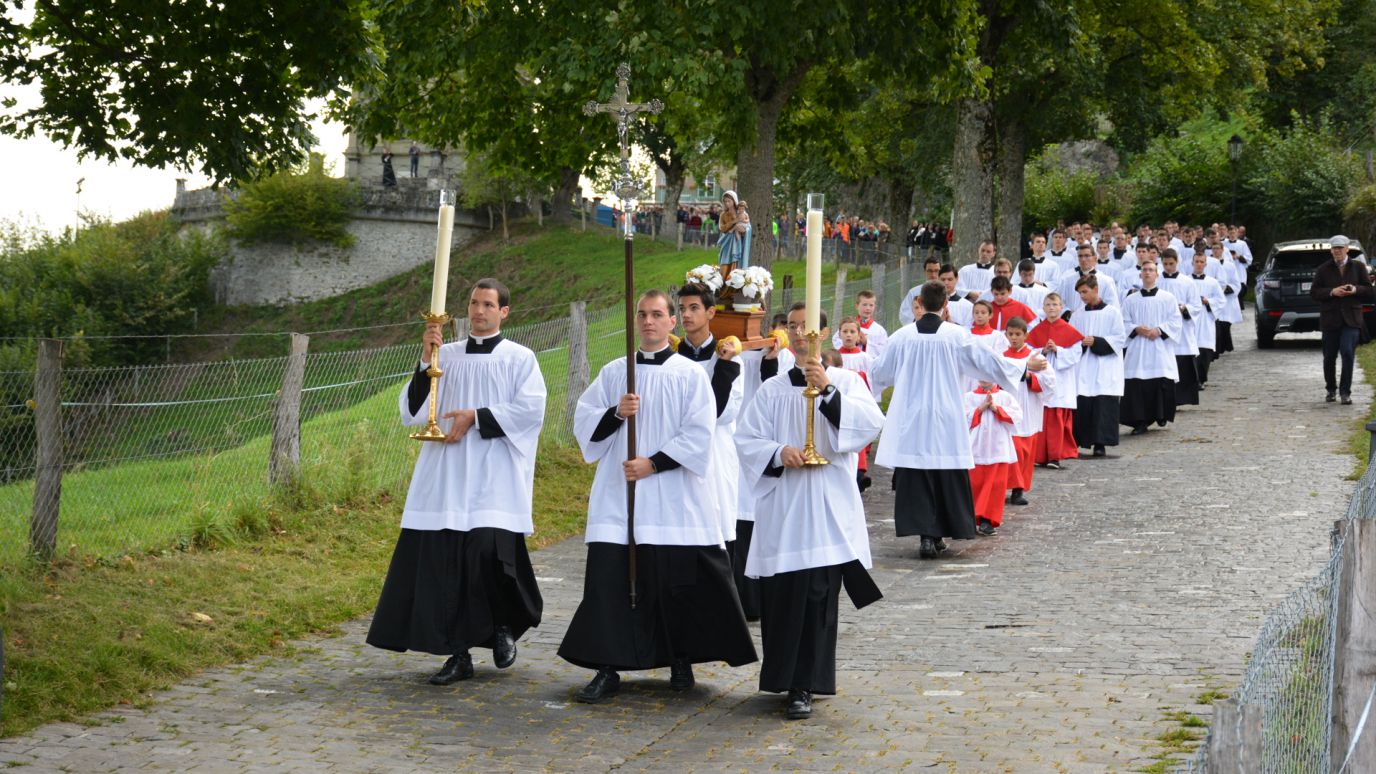 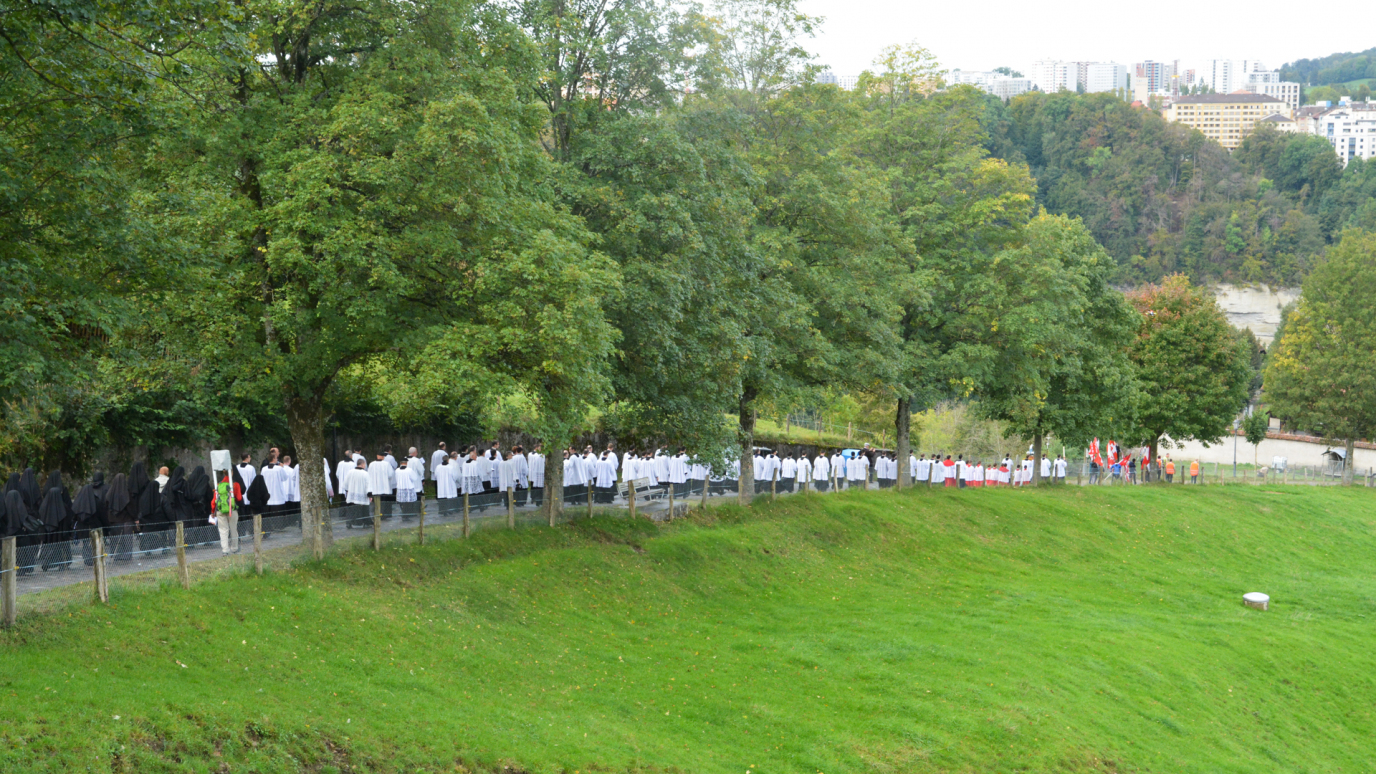 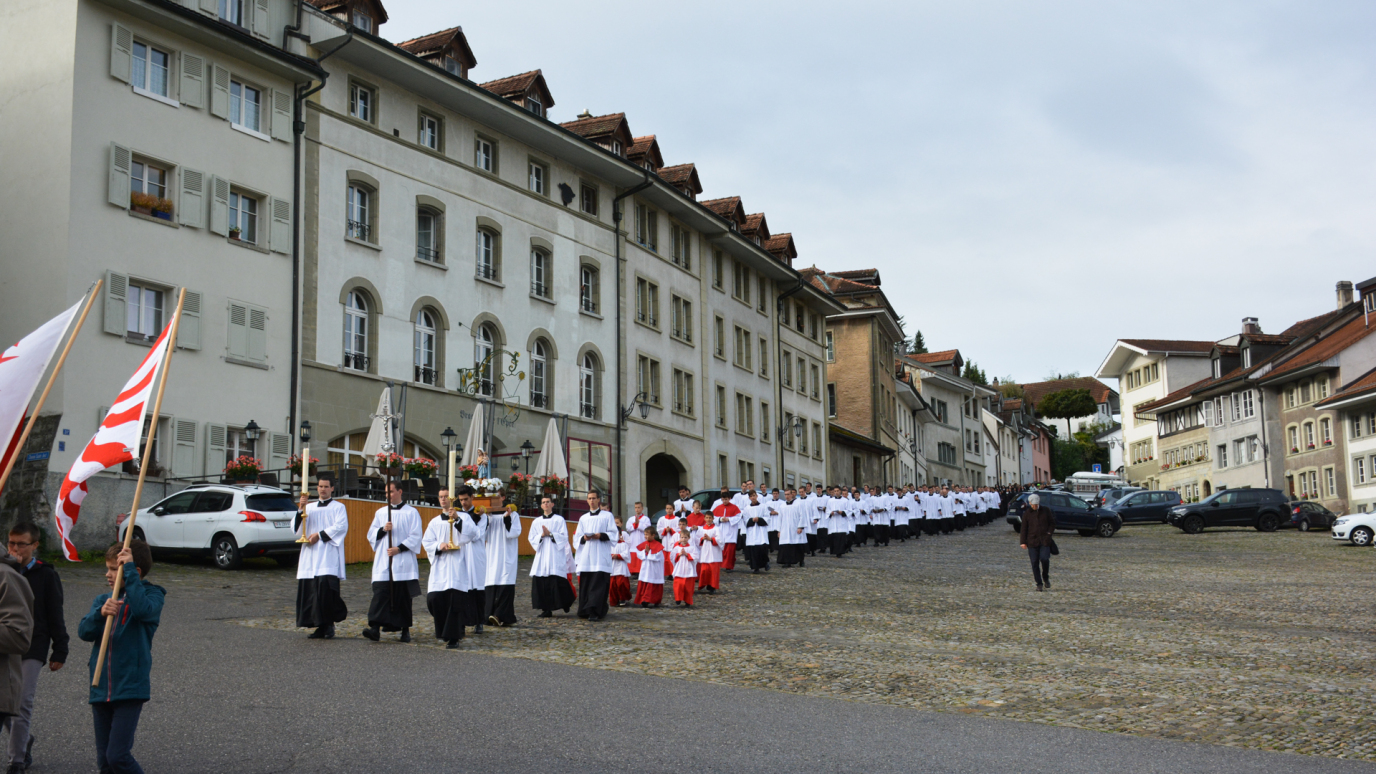 Bishop Morerod was so kind as to place the Augustinian Church of Saint Maurice at our disposal for Mass at the faldstool, with Bishop Tissier celebrating.

To welcome the procession, whose singing they heard in the distance, the porters set the church bells in motion, and to the sound of this beautiful carillon, a crowd of more than 500 faithful entered the church. The Swiss clergy was massively present, and the choir was no less full than the nave. 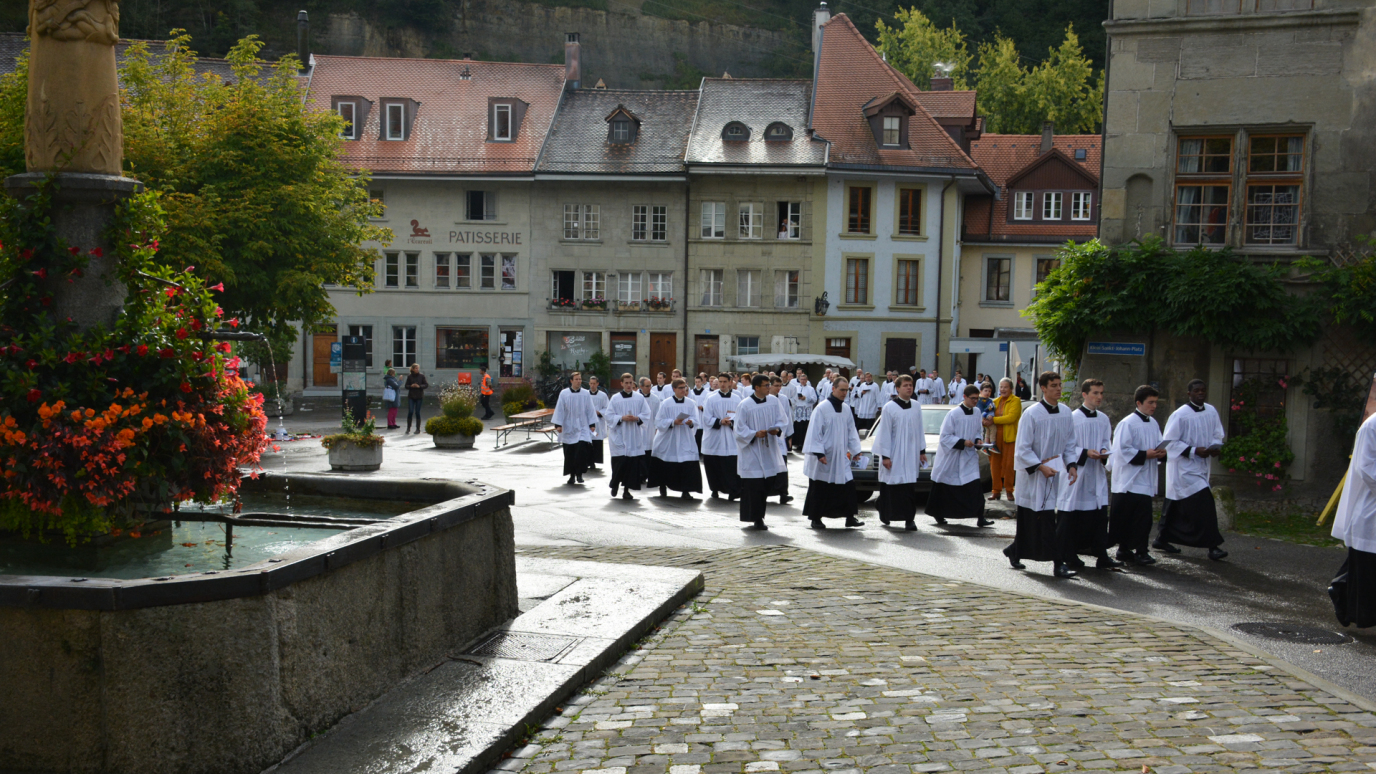 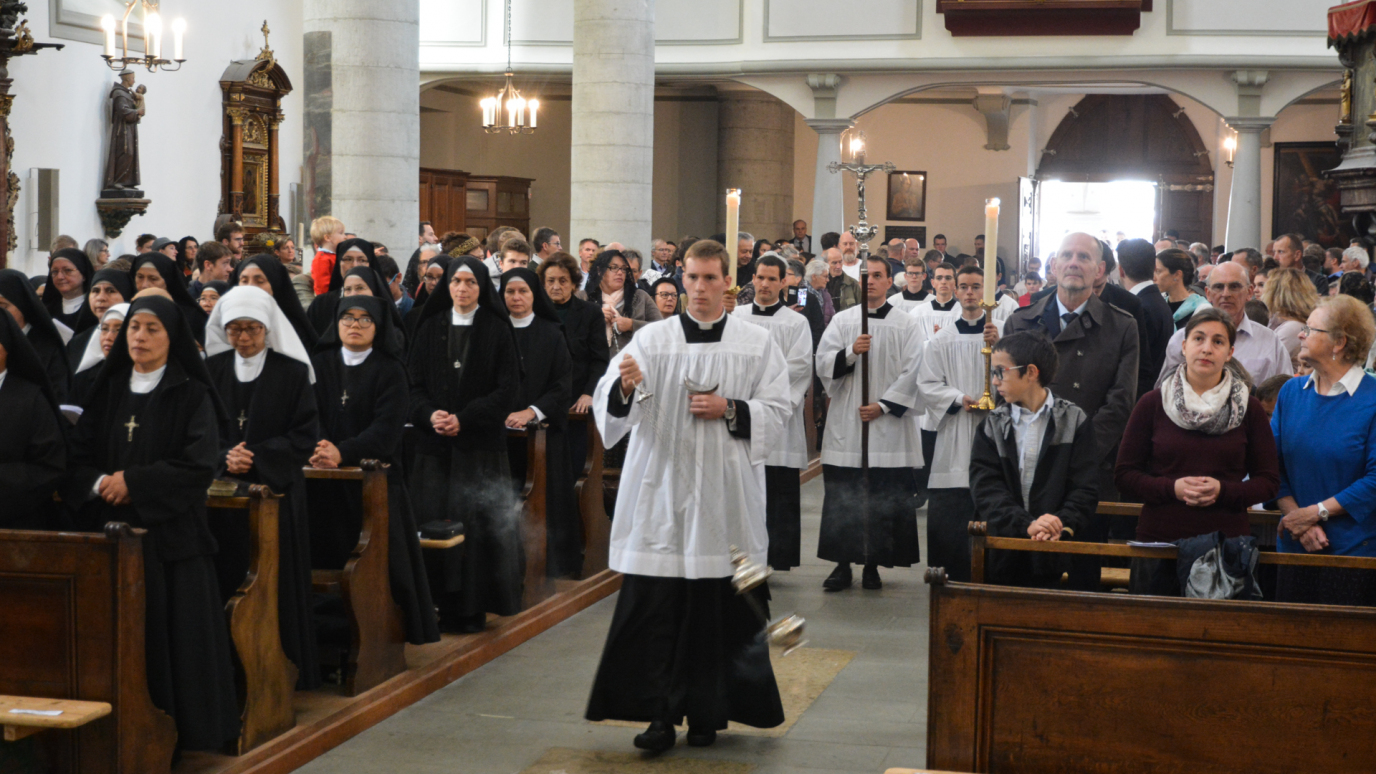 Then, radiant, the veteran of the first hour ascended to the altar for this anniversary mass, which on this first Saturday of the month was the votive Mass of the Immaculate Heart of Mary. In addition, from the choir loft of this baroque church, some baroque pieces, answered the seminary scola, giving a very solemn air to the ceremony. 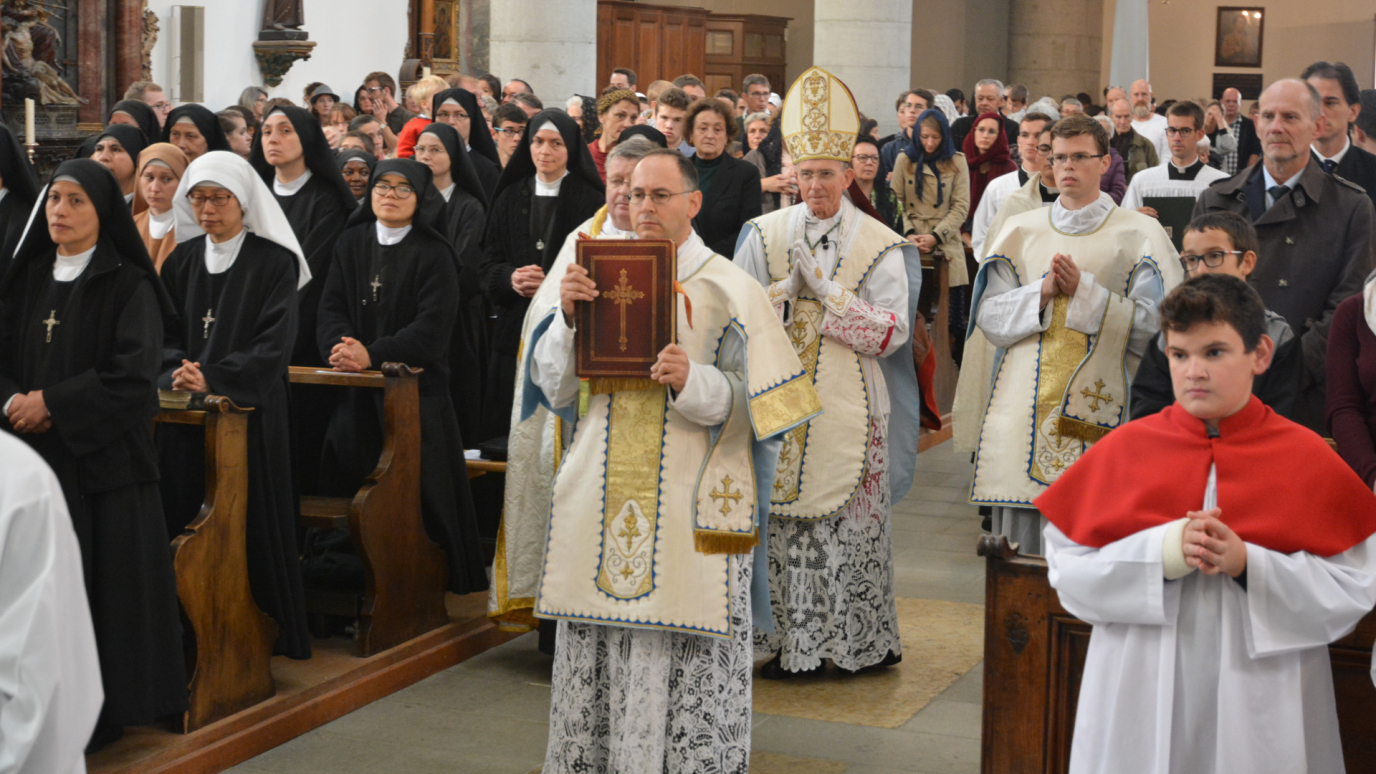 In his own words, the Bishop broadly painted the providential opening of this seminary: depicting the manner in which God pushed his servant Marcel Lefebvre to take over the direction of this nucleus, he who was thinking of retirement, and did not think it was his duty to embark on such a “risky adventure.” 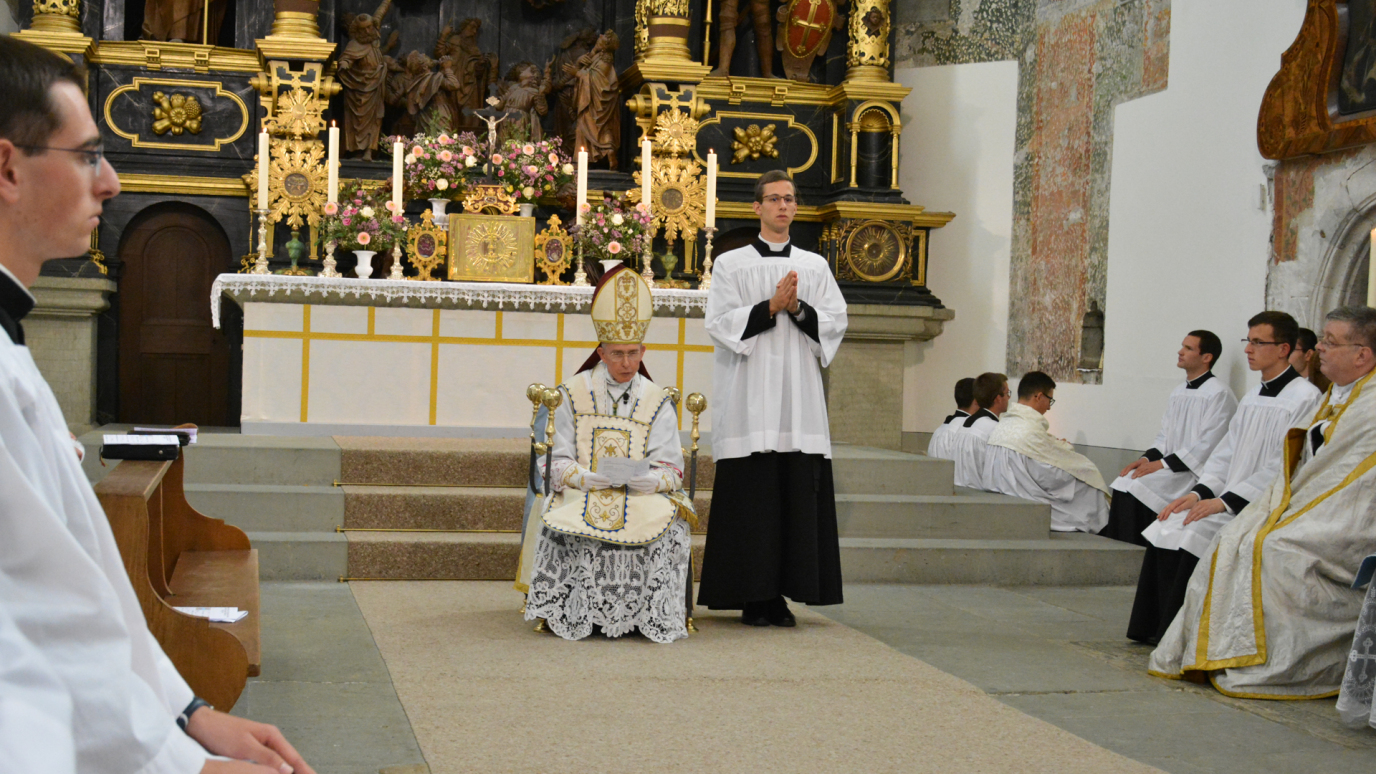 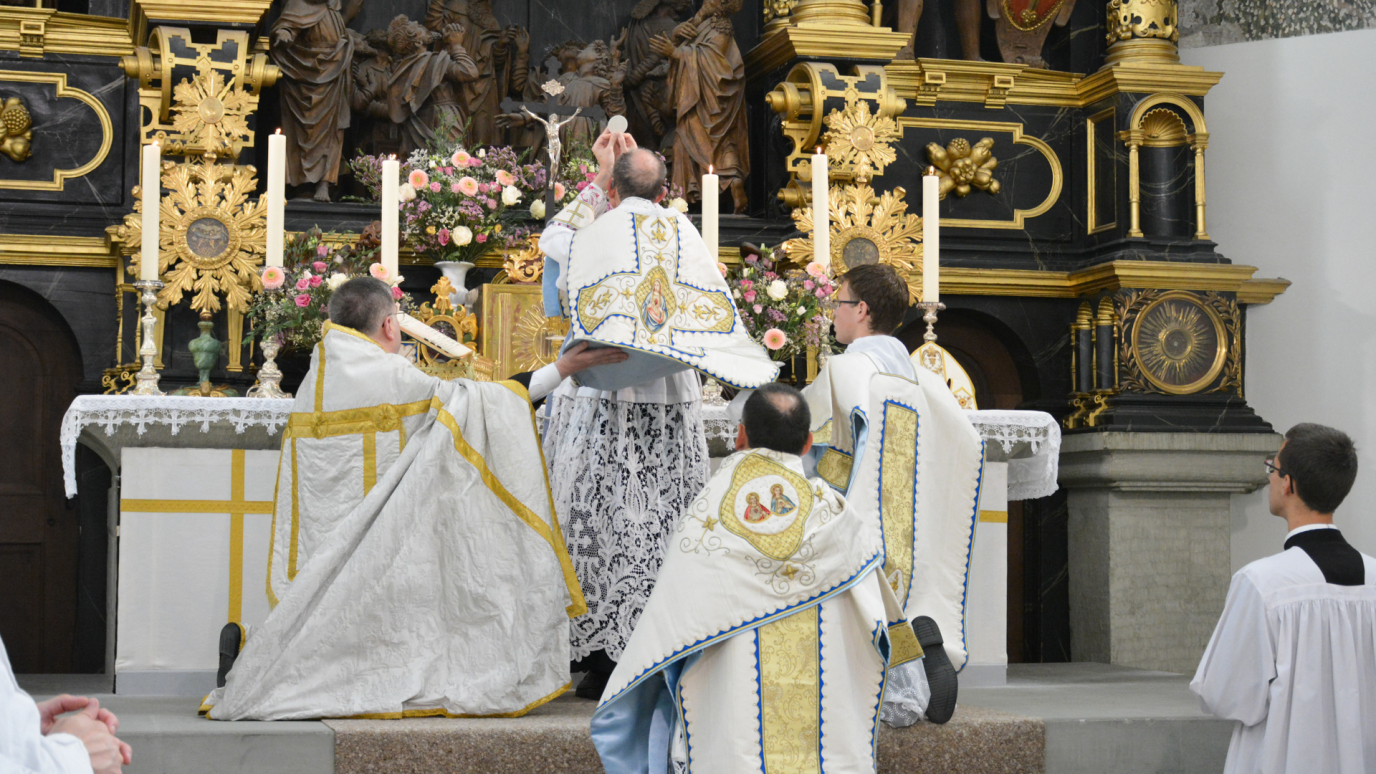 After the magnificent Mass, which came to a close with the singing of the Te Deum, aperitifs were served on the square.

During the meal that followed, Fr. Pellouchoud traced the history of the foundation, and presented the protagonists of this group. Then Bishop Tissier recounted his memoirs, the recollection of the events that led him to Archbishop Lefebvre, and his first year in the seminary in Fribourg. He exhorted us to take the example of the Archbishop’s obedience to follow—and not lead—Providence. Fr. Bouchacourt, second assistant to the Superior General, concluded by insisting on the importance of holding high and firmly the torch that Archbishop Lefebvre has passed on us, and that is incumbent upon us to transmit. 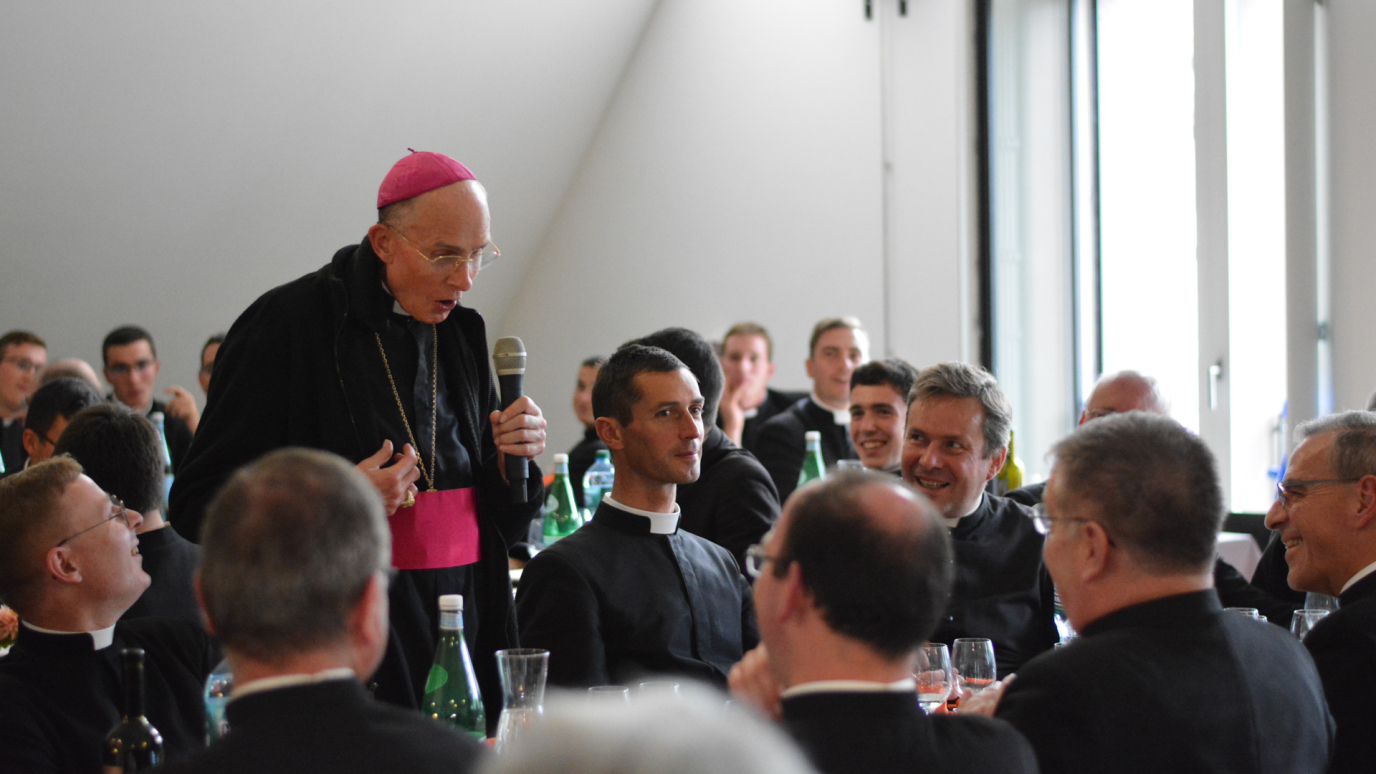 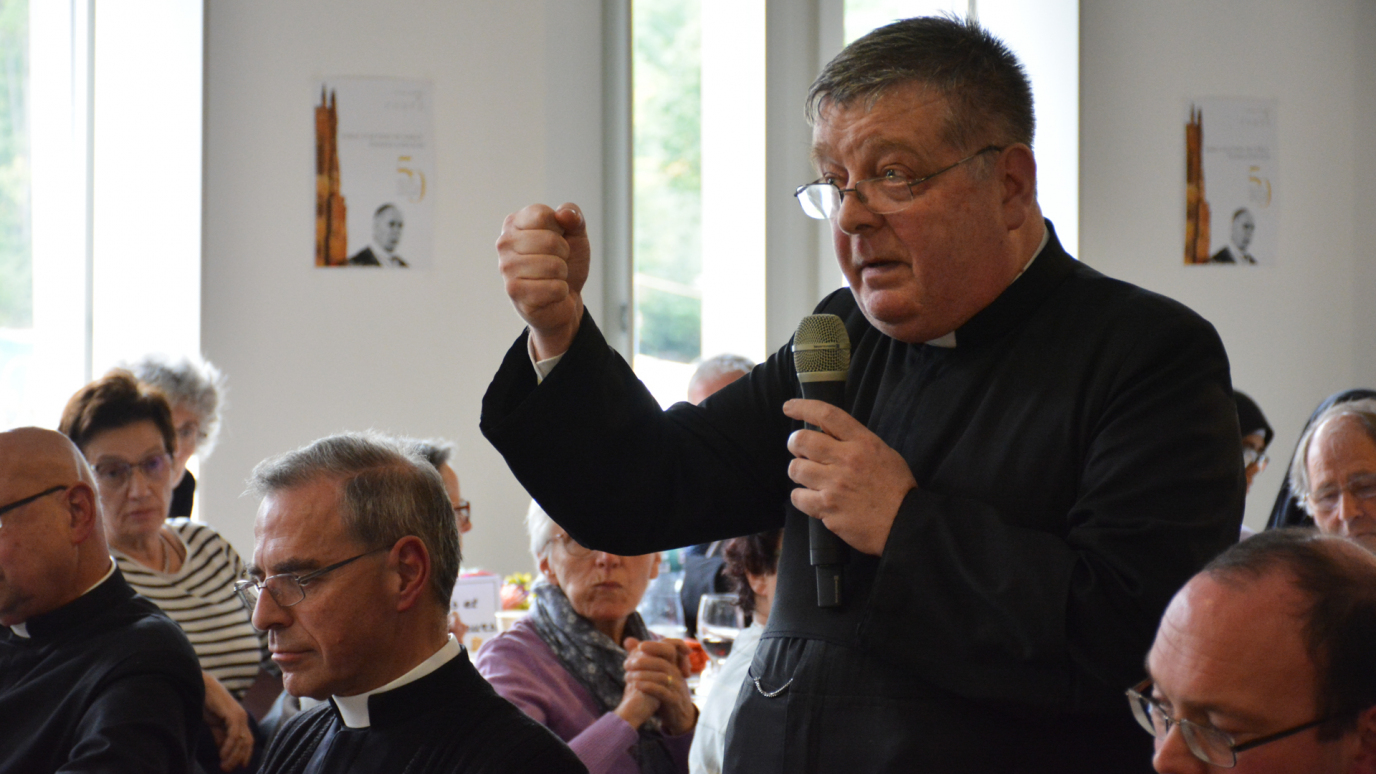 With these good words, the seminary left to visit Fribourg, guided by the Fr. Mörgeli. The Bishop deigned to join the visit. The tour included St. Michael’s College, founded by St. Peter Canisius, the Catholic University of George Python and, icing on the cake, St. Nicholas Cathedral. 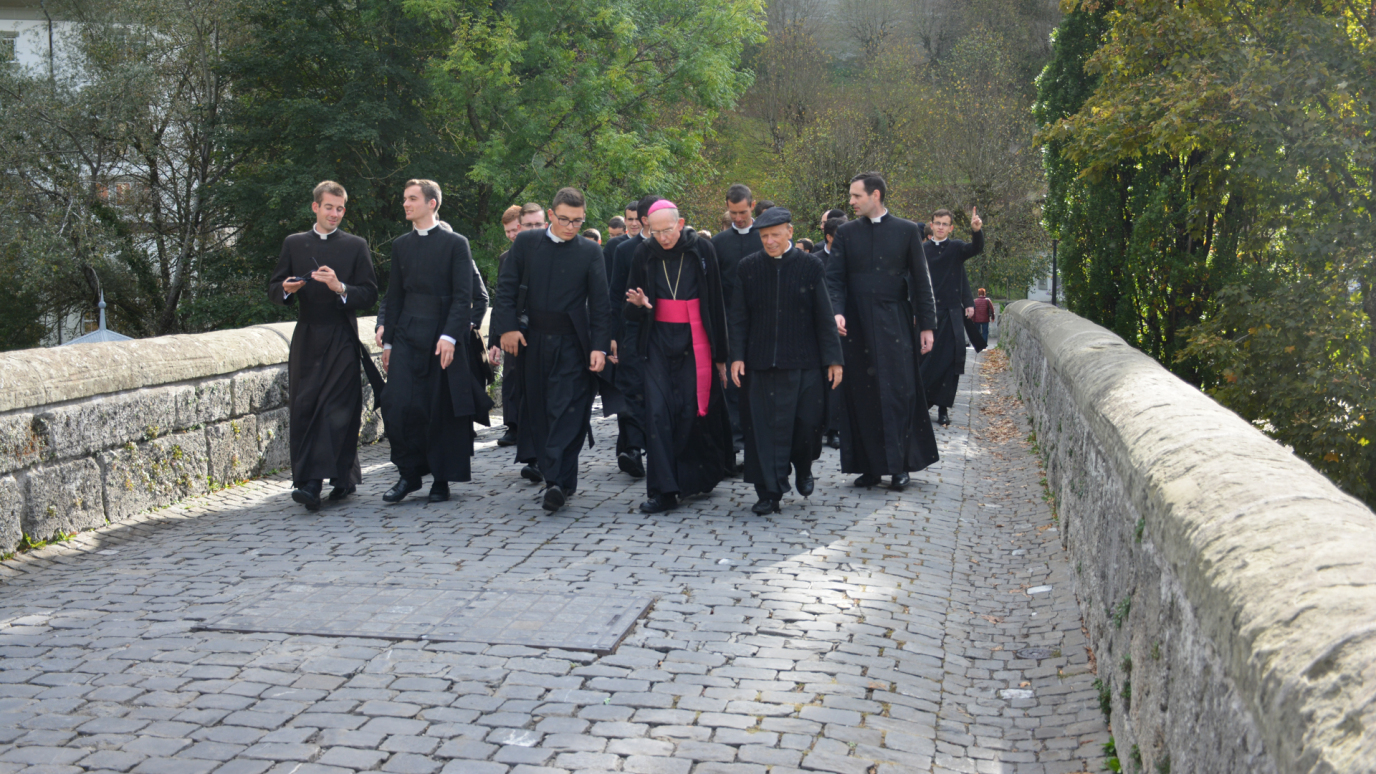 Organized with undeniable brilliance and great generosity by the prior of Enney, under the responsibility of Fr. Schreiber, District Superior of Switzerland, this familial pilgrimage owes its success to the innumerable considerations of Divine Providence, to the benevolence in all charity of the local authorities, as well as the encouraging presence of the many clergy and faithful from afar who came to support us.

The seminary expresses its fullest gratitude to all those who contributed to the beauty of this event, and assures them of their prayers.